That last post was an accidental publish!  No, I was not through with that particular post when I hit publish.  Oh, well.  I'll pick up on that oops today (which was Nov. 8 but 4 blue screen crashes later I had to stop to do some computer fixes.)  With the intent of finding Dog Mountain at some point in the day we piled, crawled and clambered into the trusty van once again.  Of course that was more on the agenda than just the mountain in the painting.  (Oh, now I remember why I accidentally posted the last blog post.  I wanted to include a pix of the painting.  Still have not found one in my library of photos.  But I digress.)  There was Bonneville dam, fish ladders, Bridge of The Gods, Cascades Locks and Multnomah Falls to be visited, too.  So off we went!


It was just a few miles to the Bridge of the Gods toll bridge.  At one point in history a landslide caused a natural bridge to form across the river, a bridge of rocks.  Click here to read more of the story.


Immediately to the left of the bridge was the Cascades Locks Marine Park and Museum.  Time to stretch some legs and explore for a bit.  The first locks were completed in 1896.  Click here for more of that story.  For folks in Europe this probably seems like new stuff in comparison to the development of the Old World.  And it is.  President Jefferson sent two men, Lewis and Clark, on an expedition to explore the Louisiana Purchase in 1805.  There was hopes of finding a Northwest Passage by water to the Pacific Ocean.  Mountains eliminated that possibility.  Truth is the Lewis and Clark Expedition explored well beyond the limits of the area of the Louisiana Purchase.  They made it to the Pacific Ocean with the help of Native Americans.  Sacagawea, a Lemhi Shoshone tribeswoman, was a guide and major contributor who made the expedition with Lewis and Clark. 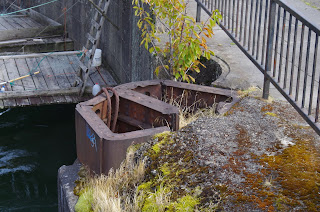 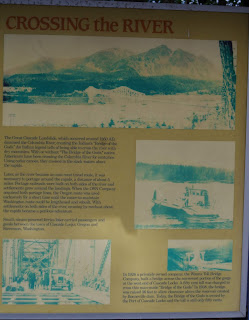 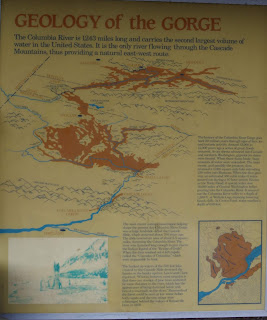 I just took you down a rabbit hole and we are supposed to be on the trail for Dog Mountain.  Once we had a good look around at the old locks it was on down the road to the Bonneville Dam, fish ladders and the current lock systems. 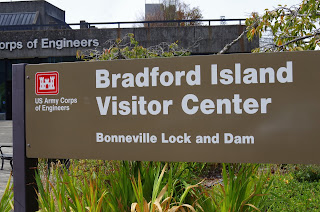 The Columbia River served as a major connection for freight and travelers through the years.  Yes, steamboats used this river.  The visitor center covered the history including replicas and pieces of equipment. 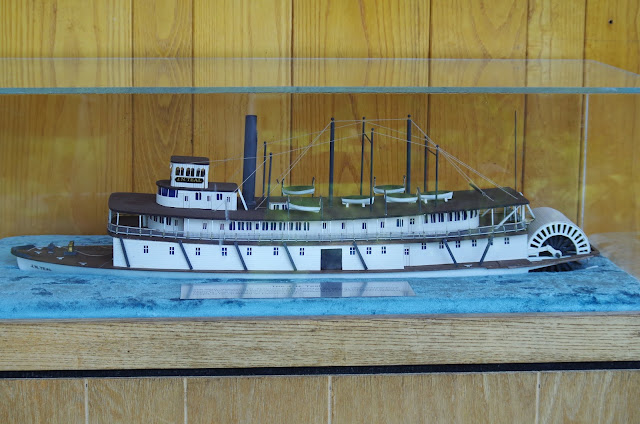 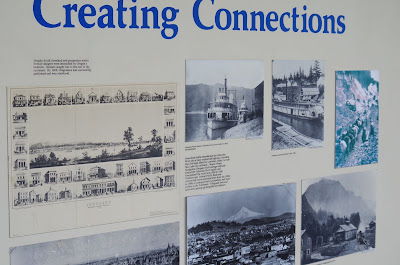 Whistle & boat wheel from the paddle boats.  Insulators almost as tall as I am and a turbine propeller were but a few of items on display.   Native American and military clothing were on display on other levels.  Up top was a view of the current Cascade Locks.  I found the group patiently waiting for me in the welcome center. 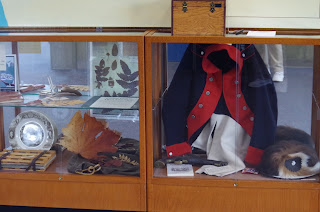 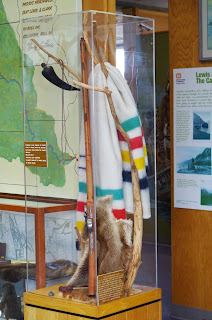 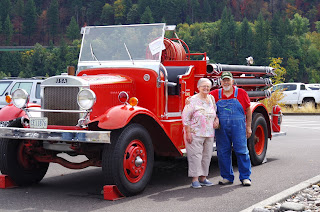 Back outside for photos of Sister #2 and Old BIL in front of the custom built fire truck.  Their youngest grandson is a firefighter in Oklahoma.  Still not ready for Dog Mountain cause we were all a bit peckish by now.  A small fish shop had all kinds of goodies including fresh fish baskets was our choice.

The sun was bright and there were tables where we could enjoy a river view.  And wild berry bushes were lining the steep drop to the river.  I was able to retrieve only one ripe berry.  Old BIL ate it and declared it to be delicious.  Lunch over and we are back on the road.  Still not to Dog Mountain, it is the Falls up next.

Sis #2 and Old BIL remained in the van.  Y BIL and Sis #4 climbed up to the bridge.  I snapped a few shots from below.  The small stream fed by the falls is an area for salmon fry to develop.  The water was crystal clear.  I saw a few of the fry but could not capture with the camera.  We three head back to the van and now it is finally time to see Dog Mountain. 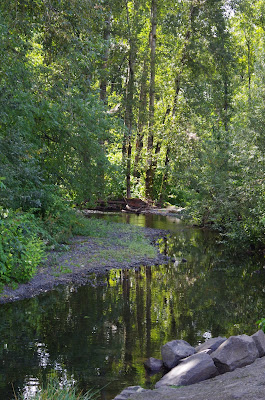 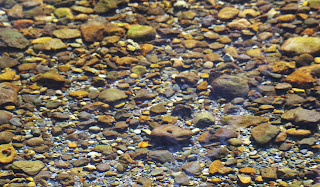 We drive past Beacon Rock for either the 3rd or 4th time.  I had lost count by then.  You see there had not been a plan that had us seeing the sights in the order they fell on the map.  No, it was the order or priority for the group to see.  Dog Mountain was just one vote.
This map has the stops numbered in the order we visited.  Not the best use of gasoline but it is only money and carbon points.

It was about 4:30 by the time we reached Dog Mountain.  Yes, we were finally there.  And it looked nothing like the painting.  Nothing.  Never the less photos were made.  We meandered down to a RV park to get closer to the river.  More photos. 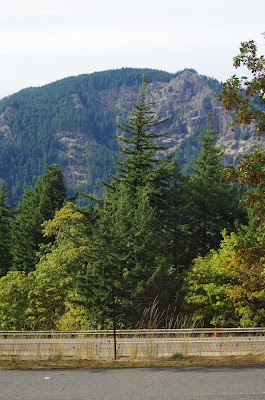 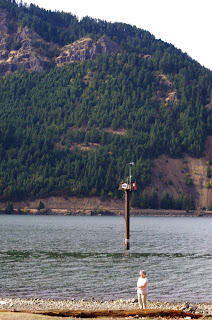 Me with Dog Mountain behind me.  YBIL and I checking out the Columbia River up close.  Sis #4 and Y BIL are planning on purchasing a travel trailer.  They decided this would be an excellent place to camp some time.  Still lots to see in this area.  For that day we were done.  Time to head back to the van and on to the house. 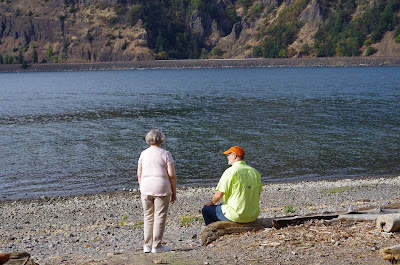 I was mildly very disappointed that Dog Mountain did not look like the painting.  And then we rounded one more curve.  There was The Mountain, Wind Mountain was the one in the painting! 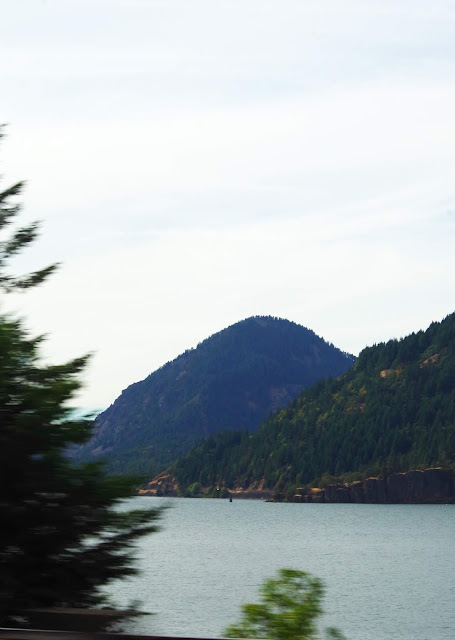 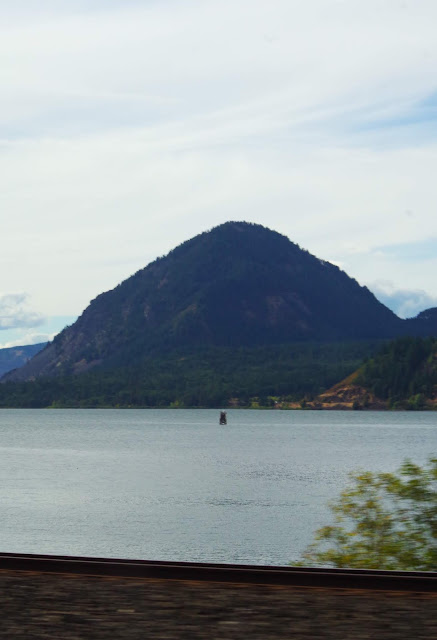 Mission accomplished.  I have looked for photos of the painting and have non available.  The painting is packed in the storage room and not easily reachable.  Maybe when we move stuff to the lake house I'll get it out and hang for display.

Once back at the house Sis #4 decided to use up all the stuff that was left and make soup for dinner.  She is such a sweetheart.  At 8 years younger than me and 14 younger the Sis #2 she does have more energy.  The rest of us began gathering our 'stuff' to leave for Portland the next morning.  Old BIL, Sis #1 and Sis #2 flew out Tuesday morning.  Sis #4, Y BIL and I left on Wednesday.  That means there is one more day of adventures for us three.  Now if my computer does not freeze up again like it did last night.  Grrrr.

For now I will leave you with the view we had out the back windows from The Ellody house on the Washougal River.

Posted by Janice at 1:11 PM No comments: 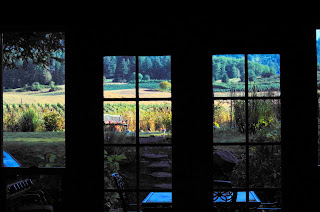 Morning in the Washougal house brought an amazing view from the dining room.  A bite of breakfast and coffee.  I wanted to get some photos in the morning light.  A walk down the hill to grab a couple of shots of the Washougal River would be good.  I have not mentioned that we were so close to this small river that we could hear its sound as soon as we stepped outside. 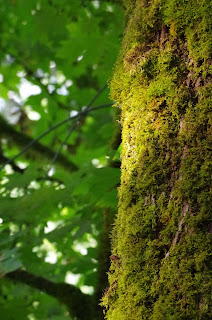 The house was located at the top of a steep ridge.  Sis #4 thought that I should not be doing that sort of walking as I was still nursing that stupid tendon issue.  She was not the boss of me.  Sis #4 and I headed out for some steps and photo ops.  Morning light is just so soft as it highlights creation. 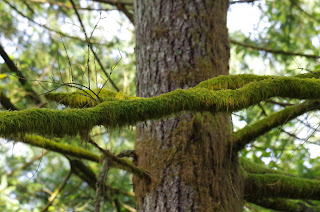 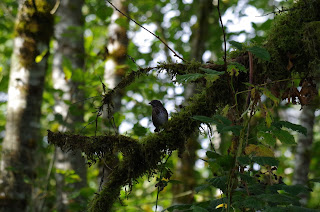 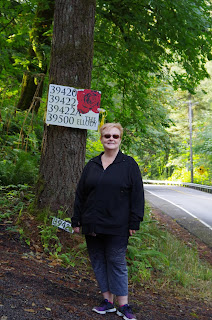 A ton of snaps with my camera that had begun giving problems hoping to salvage a few good captures.  Bummed about the camera.  Once back up top, snaps of the grounds and extra cottage.  Sis #4 really wanted to go inside but the locks were not set for our code.  A peek through windows had to do.   Sis #4 headed back inside to dress for the day.  I continued getting a few photos. 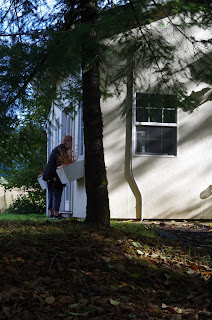 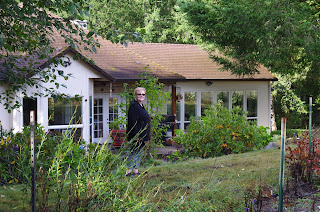 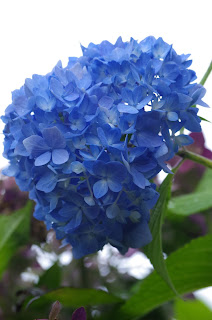 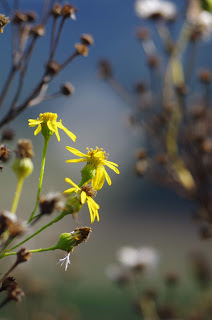 Landscaping was simple with the native(?) hydrangeas being in full bloom.


While the trip to Oregon was primarily for the wedding of Sis #2's granddaughter, we other folks had some things we wanted to do, also.  Sis #1 wanted to have a couple of days with her friends.  Sis #2 wanted to see the granddaughter's home.  Old BIL wanted to eat at Mo's.  Sis #4 wanted to walk on the beach and see the ocean.  Young BIL was glad to take in any dam or winery that came along the way.  I was happy to do all that but if we could look for a certain mountain it would be very meaningful.  And this was the day to look for that specific mountain. 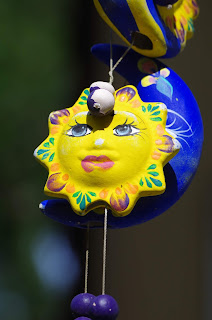 Why a specific mountain in a whole mountain range that included Mt. St. Helens, Mt. Hood and literally thousands of other mountains?  It was Hubby's fault.  You know, the Hubby that dug his heels in and would not come on this trip?  Yes, That Hubby.  Hubby's maternal grandfather had 3 paintings that he had bought when he lived and worked in the Columbia River area.  Those three paintings hung in Hubby's sight as he grew up, first in the grandparents' homes.  Later, in his parents home.  After Hubby's father passed away and Mom had to move to a memory unit the paintings lived on our walls.  I had researched the location and found the mountain.  Unfortunately, that info was lost when the old computer crashed 2 years ago, bummer.  With only my 10 year old phone available to search I came up with Dog Mt.  A park was located across from the mountain.  That seemed about right.  Y BIL said he would be glad to look for it in the afternoon.  Great.

Posted by Janice at 1:22 PM No comments: