Cousin Phyllis has calmed down from 7 years ago for her first visit.  Back then she was ready to go and do morning till night.  Yesterday she was perfectly content to stay home while we ran errands.  Today just a short visit to a local attraction was sufficient.  We did go ahead and head out to The Oasis on Lake Travis.  By the time we arrived at The Oasis the clouds were cleared and sun was glittering on the lake.

We took a backroad back to the apartment.  And now it is time to watch Wheel of Fortune.  We have all turned into a bunch of old people.  The morning was spent watching TV shows from the 1950-80's.  Those shows with a cup of coffee made for a relaxing start to the day.

There is the background noise of our life still going on concerning the grandchildren.  The details of which involve their mother, our Son's ex wife.  I will just say that the oldest grandson now lives with our son.  Another grandson is in a therapeutic compound.  The youngest grandson has requested to live full time with his dad.  Son certainly has his hands full.  We will distract ourselves enjoying visiting with Gene's cousin.

I would have posted photos of the lake views but my computer will not 'see' the sim card.  Repairs to follow.  Talk about luck, my warranty runs out in 5 days!

Email ThisBlogThis!Share to TwitterShare to FacebookShare to Pinterest
Labels: family

Busy But Not Hectic

There are busy days than can cause a person to have a near stress attack.  Today was busy but at a pace that was manageable.  Hubby and I are members of a Stretch Lab.  The link to the Stretch Lab will explain better than I can what is done.  I can say we both have a better range of motion.  In addition more stability and just generally feel better.  There is still mask wearing and lots of sanitizing between clients.

More food and water pickup while we entertain our Cousin.  I had two items to return, one to Kohl's.  The second a drop off at the UPS store.  All four locations were practicing social distancing and wearing masks.  No one was being upset with the regulations.  Which is just courtesy and common sense.  That has been in short supply for too long.

Yesterday was a pot roast dinner with enough left overs for dinner tonight.  One of those easy meals that at one time was an inexpensive meal.  Still less expensive than two meals for three in a restaurant.  And it makes it smell so good when it is cooking.  A real comfort food meal.  Yes, busy but not crazy.  After last week this was needed.

Update on Sister #1.  Her port was installed yesterday.  She reports soreness but little pain beyond that around the port.  The doctor told she would be on chemo for the rest of her life.  We sisters are praying she does not have a bad reaction to the chemo.  Otherwise the outlook is bleak.

No words of wisdom just wishes for a day filled with love. 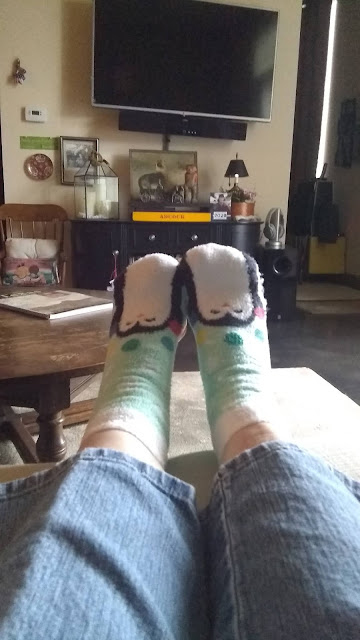 Email ThisBlogThis!Share to TwitterShare to FacebookShare to Pinterest
Labels: peaceful 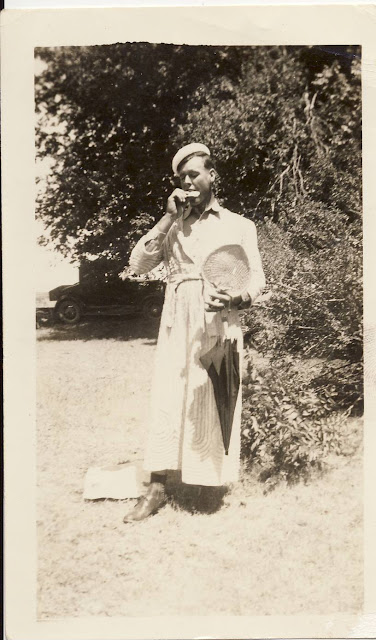 In the US there is a tradition of basketball teams from colleges and university competing to be the national champion.  That final rush starts with 64 teams that do bracket elimination games over a period of about 3 weeks.  The period of time of the games is called March Madness.  My family has never needed sports to have its own March Madness.  First of all my dad was born in March.  Consider the photo to the left for verification of Dad's just a bit crazy side.

This craziness has continued through the years.   Sis #1 and Sis #2 were known as having the fastest car in the area.  Yep, drag racing all the time.  Daddy said he couldn't figure out why he had to replace the tires so often. 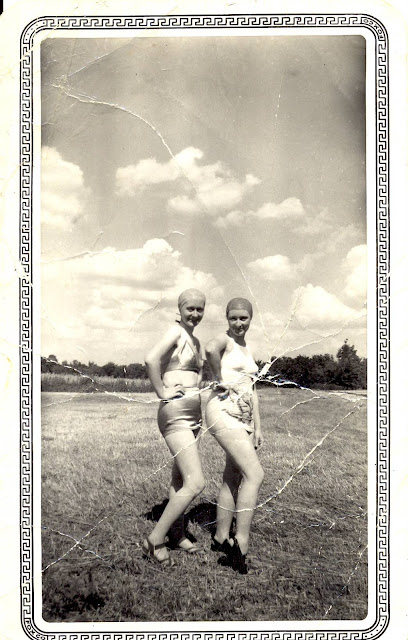 Mom was not above a bit of craziness especially when her sister was around.  This looks like some March Madness going on in this photo.

Then there are times when I was a bit less than lady like. 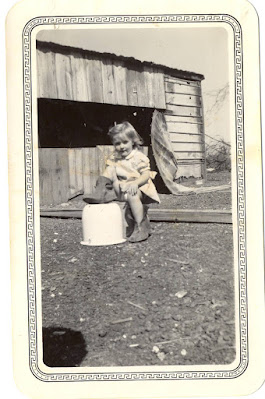 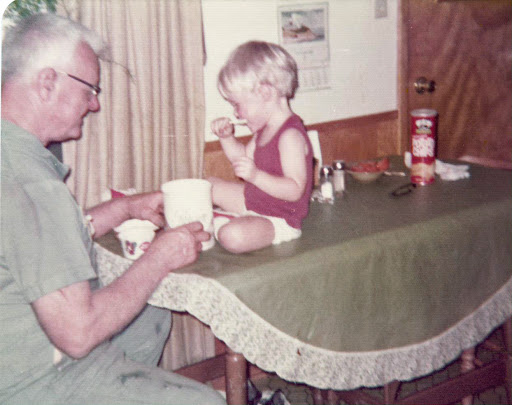 Daddy made certain the gene was developed for the grand kids. 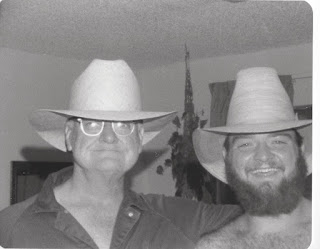 This March brought this crazy: 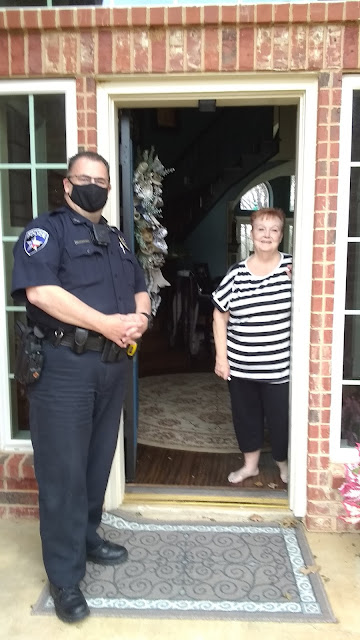 Sis #4's iPhone malfunctioned.  She accidentally dialed 911.  Operator answered and police had to be dispatched.  Text notices were sent to all #4's emergency contacts.  They all called to check on her . . . at almost the exact same time.  Things settled down sort of until she realized notices were being sent to everyone every time she changed the location of her phone.  Well, that made for close to an hour of complete craziness and lots of giggles.
Our youngest grand son decided that he needed to see just how much steak he could eat.

Of course everyone gives the doggie a birthday party. 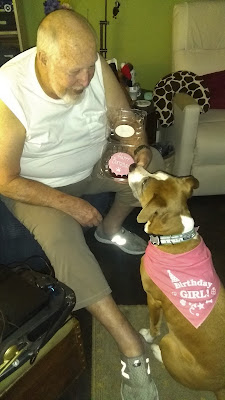 Then a week later while I am at the Son's house watching the liquor cabinet and teen boys, the sweet DJ is outside keeping the world safe at about 1:30 in the early morning.  Suddenly she reappears in the living area.  A terrible odor fills the room as she wipes herself on her favorite soft pad.  I ran and grabbed the 'skunked' DJ.  After confirming with younger noses that indeed that was skunk, she was put in the garage.  Later that morning, like when there was daylight, Grandpa came with items to remove said scent from DJ.  It was mostly successful.
Boiling vinegar replaced the skunk smell in the house.  The garage may never be the same.  Son et al are still sleeping with windows open.
Yes, March Madness indeed.
Peace,
Janice
Posted by Janice at 12:39 AM 2 comments:

Last week was full of DJ and Lila care.  Of course that was little more than staying at our son's home, feeding them, and allowing them to sit by me on the sofa.  Lila the kitty was missing her peeps and would sit for hours in my lap.  DJ slept a lot, also.  I read mostly.  Hubby and I would swap the days we spent at son's home.  Oh, the reason we were doing the care was a spring break ski trip for the family. 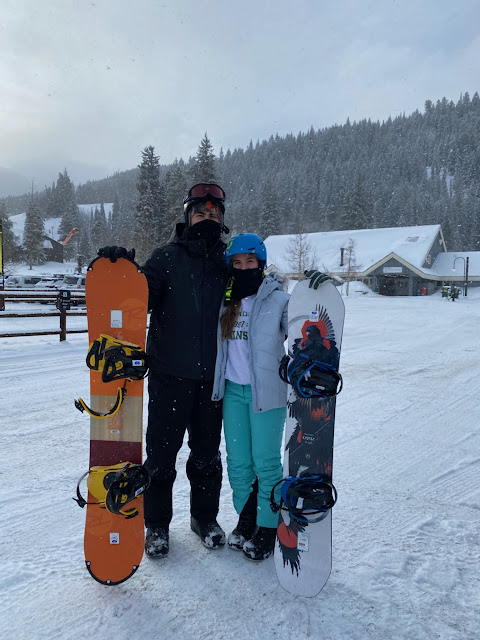 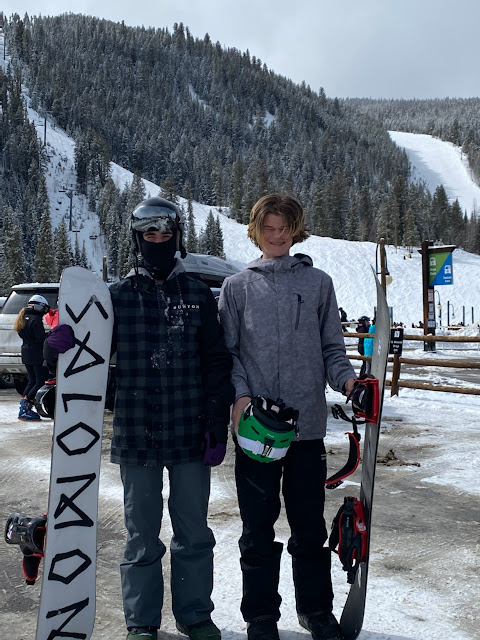 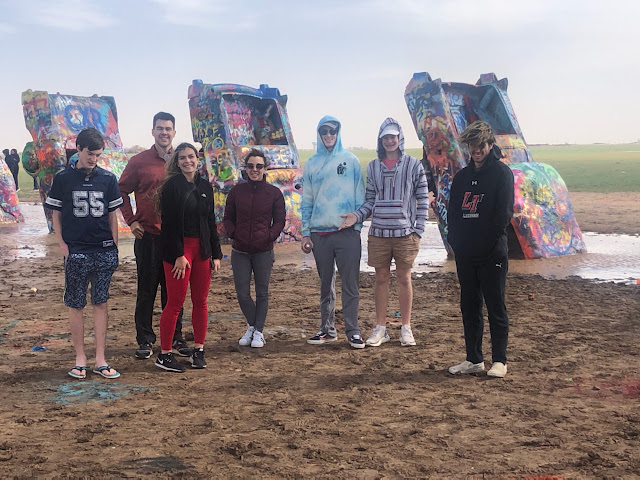 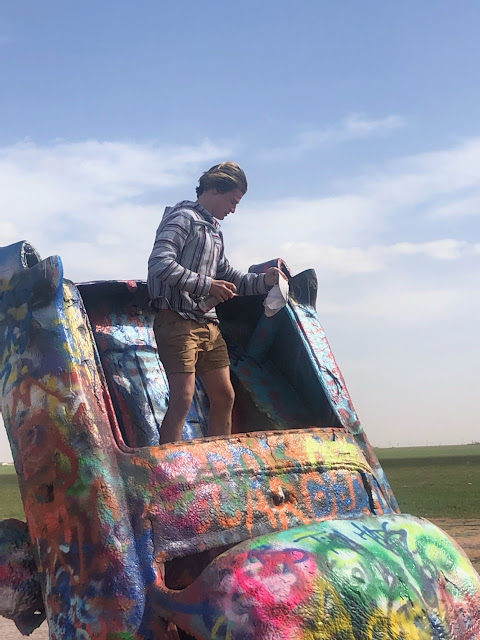 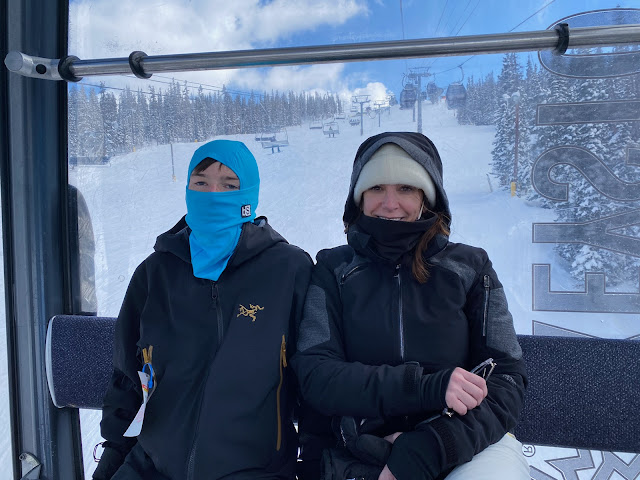 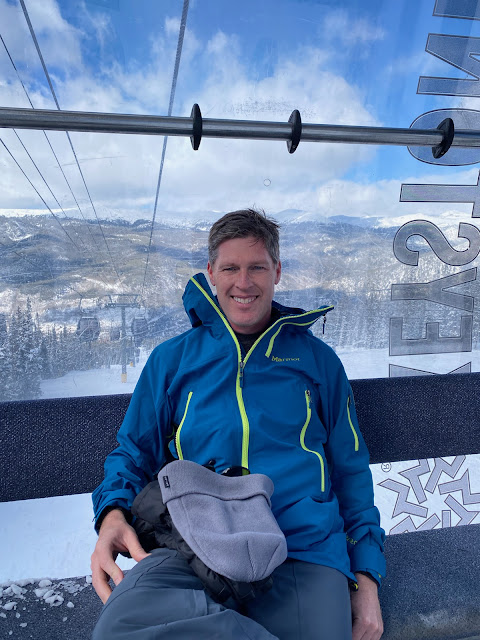 The latter part of this week we are, also, doing grandparent duty.  Yesterday required Son and DIL to make a quick trip to Ft. Worth.  Bonus grandson had a doctor's appointment so I did that duty.  With Cousin coming next week for her yearly visit, Grandpa ask Oldest grandson for help getting all the bed equipment out of the storage area.  We are attempting to get another bed setup to my nephew to further clear out our storage area.

Family is a joy.  Unexpected conflicts in schedules can arise.  Months ago Son's friend planned an adults only weekend starting this evening.  Without realizing the conflict oral surgery for removal of Oldest grandson's wisdom teeth was scheduled for today.  I'll be spend this weekend at Son's house being food prep and overseer of two grandsons and the son of Son's friend.  As I am typing this Hubby/Grandpa is on his way to X-DIL's house to take Youngest grandson to soccer practice.

After a year of such limited contact, all this activity feels really different.  With our having our first Covid shot the family feels much safer allowing us to be them.  And it is good to have a bit more purpose than just sitting at home, staying away from everyone.  With Oldest Sis being told that her use by date is sooner than any of us anticipated, family is so precious, so important to support in what ever way is needed.

Email ThisBlogThis!Share to TwitterShare to FacebookShare to Pinterest
Labels: family

After a series of ridiculous missteps by our state, inoculations are finally beginning to be more on track.  We have received our first shot with the second to come on April 1, no fooling.  My three sisters have both shots and the two BIL are, also, fully vaccinated.

We sisters had another get together March 3 - 8.  No special nights for dress up occasions or special menus.  Just time together and shots.  Yes, this time together included Oldest and Youngest sisters getting their final shot.  Youngest's appointment was at 8 AM about 30 minutes from her home.  The location was the Texas Speedway.  And according to Youngest they definitely were speedy.  I did not go with as the previous day's travel left me with body discomfort and beginning migraine.  By evening I was better.

Saturday morning was Oldest's time for her final shot.  Her appointment was 9 AM at a different location.  It was almost 50 minute drive to her location.  I was her ride along in the event she had a reaction.  I remained in the car while she went to her personal physician's office.   The time passed rapidly for me as I fell asleep in the sunshine filled car seat!  Sister said it did go quickly and she had no adverse reaction.

As usual Sister time meat lots of talking, more than needed eating and games.  Mexican Train dominoes is always a favorite as it reminds of times with our parents.  Another game named "Just Like Mama Used to Say".  The game involves a card with a beginning statement.  Two additional cards with a middle and final part to form a saying.  Multiple players are dealt three middle and three final cards.  The person that is it for the round reads the first part.  The remaining players put together a middle and final card to make a funny statement.  An example is, (That Lawyer is sleazy as) (a clown) (doing a strip).  The person asking the question gets to pick the funniest combination.  Who ever winds up with the most picked combinations is the winner.

August, 2020, was the Covid Cruse for us four sisters.  Here are a few photos from the different days as we pretend visited different countries.  You can guess the country or occasion. 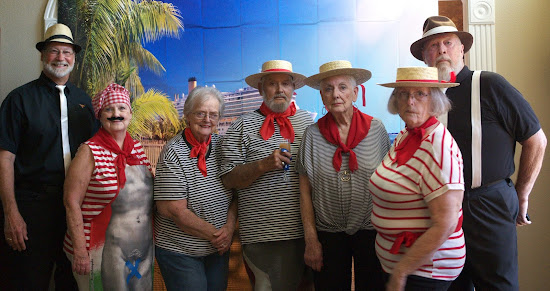 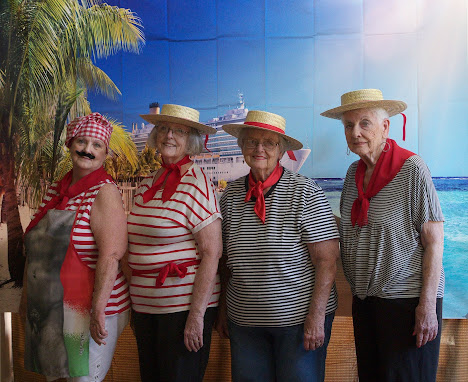 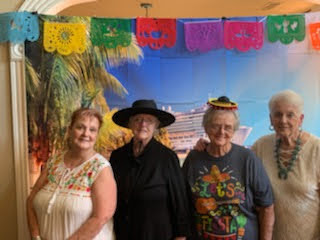 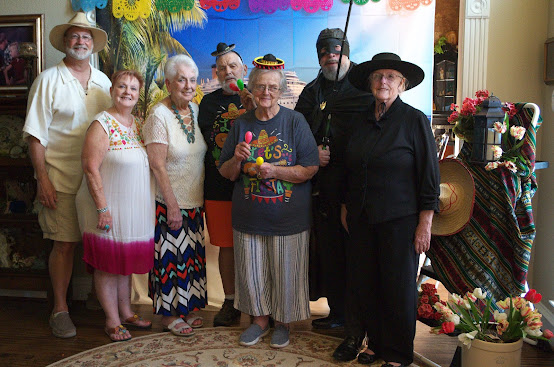 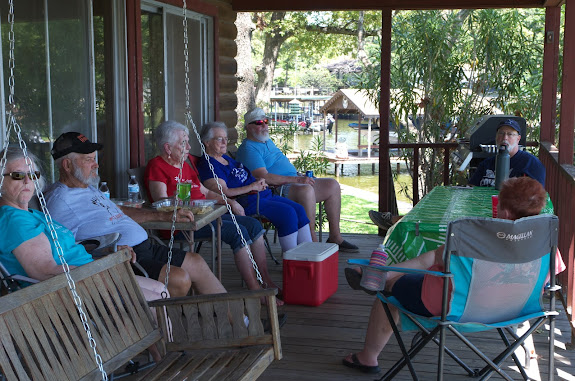 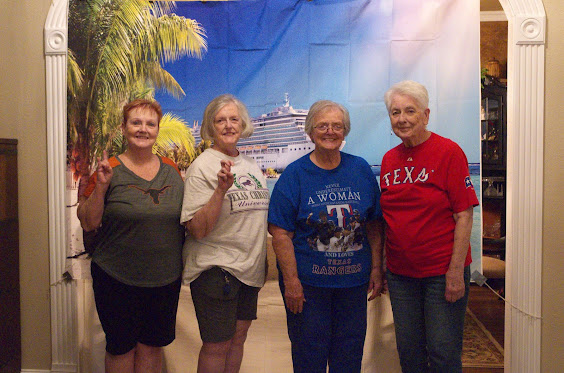 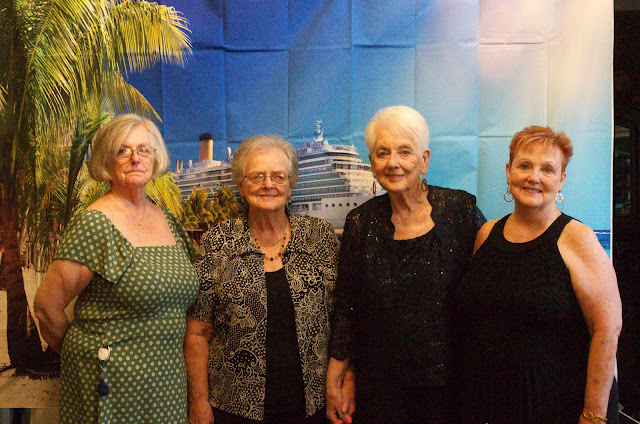 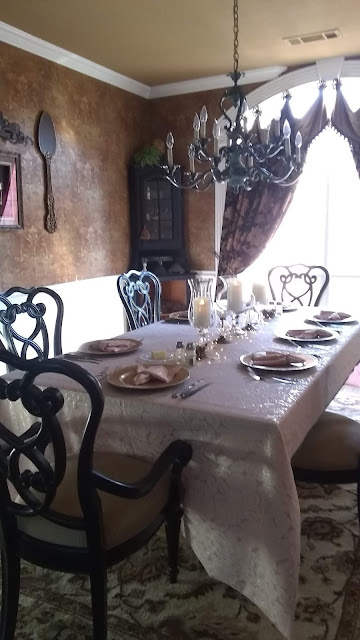 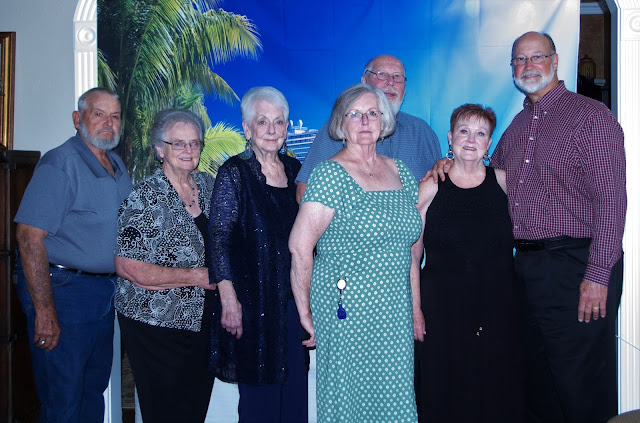 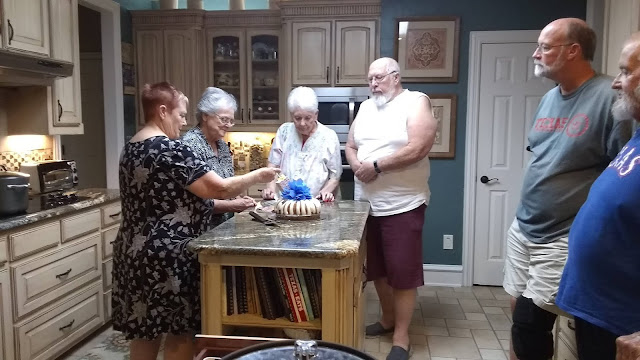 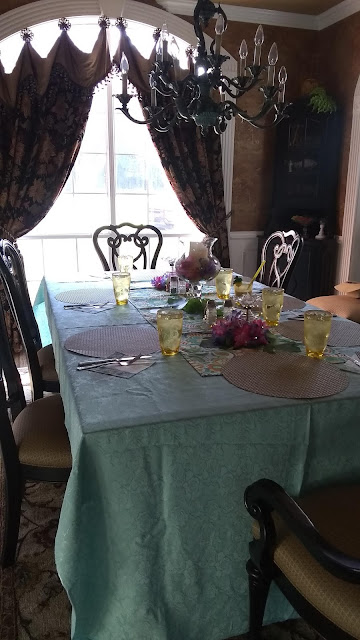 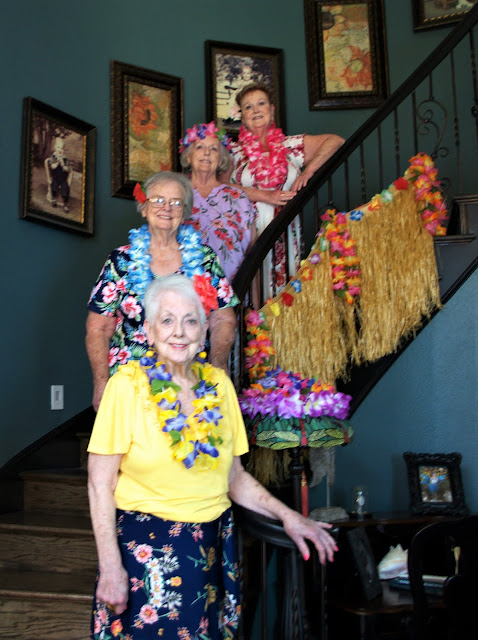 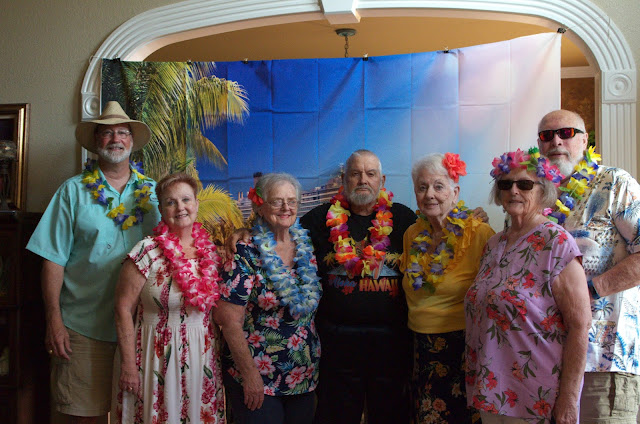 Three days after this Sis #1 had a mild heart attack and a stent was place in the veins.  A month later she was diagnosed with colon cancer.  A seven hour surgery was successful.  Uterus, a late stage 2 tumor in the colon and some surrounding supportive tissue were removed.  Lymph nodes and other tissues were collected and found to be cancer free.  Sis was on the mend!

Now following our last gathering in early March sis went in for follow up checkups.  She had been experiencing some unexplained symptoms.  Multiple doctor visits, biopsies, CT scans and multiple blood works were performed.  The news was not the best.  Sis was told this was a different cancer, a very aggressive form.  Tumors in a kidney, vagina and back in the colon require chemo as soon as possible.  Otherwise she most likely will not live through the summer.  Chemo starts in around two weeks.

Live goes on all over the world.  So many losses of life and quality of life due to Covid 19.  Inoculations hold hopes of giving the world a herd immunity.  It will be great to once again be in the presence of one another for as long as possible.  Live in the moment making memories to bring joy in the future.