This past weekend was another DJ, Lyla, Norma, and plants care weekend for us.  Son and DIL were in Montana for Parents' weekend.  To say Bonus/GS #2 is happy is an understatement.  BGS #2 is not in love with the out of doors.  He can hardly wait for the snow to set in.  We shall see how he feels about that along about the end of March or April of 2023.When BGS #2 and DIL visited in February it was soooo cold.  Like  -14.4℃, 6℉.  Yes, it will be even colder with -℉ numbers being common.  So long as he is happy and the grades stay acceptable it will be good.  DIL noted that most of his new friends all grew us in areas where skiing and snowboarding were normal. 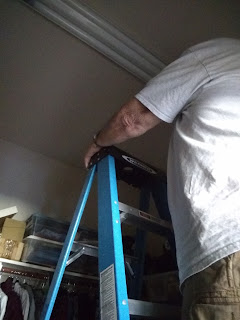 Hubby always likes to check around Son's home to see if there is something he can do for them while we are house setting.  There is usually a recycle bin needing attention.  I took care of that before Hubby had the opportunity.  He did remember DIL's closet light had issues.  He first tried the small step stool.  He is over 6 feet tall but still did not feel comfortable on the top step of the stool to reach the 10 ft. high ceiling fixture.  He helped himself to the tall ladder in the garage.  That worked fine.  He had asked me to spot him on the step stool so I just continued to hang around.  And tattle to the kids that he was on a ladder.

Hubby successfully was able to remove the fluorescent light tubes.  A trip to Home Depot, another climb up the ladder, and the light project was finished.  Except the old lights contained mercury so a special recycling place needed to be found.  Online info noted Home Depot did recycling.  After going to two different locations, Hubby found that was not possible through Home Depot.  Lowe's proved to be the company to provide that service.  Hubby was able to do the Lowe's run on Monday afternoon on the way home.

We had noticed the last couple of times we had been at Son's, one of the end tables seemed extra wobbly.  I just thought it was a loose screw.   I noted the wobble to Hubby as he was still in 'fix-it' mode.  Upon inspection, it was obvious the table support system had suffered a major injury.  There were attempted repairs made at some point.  They were insufficient as boards were split and needed to be glued back together.  Hubby gathered the parts of the table needing repairs to take home.  He has glue and clamps for these types of projects.  The table top was placed in Son's closet.  We failed to mention this to Son and DIL.

Son and DIL returned to Round Rock Monday night, mid-evening.  Today, Tuesday, late-afternoon Hubby received a text from DIL.  She wondered where her table was.  Hubby told her he had parts of it here to repair.  He noted it appeared to have been damaged.  Shortly Hubby's phone rang.  Oops.  Seems the damage was unknown to the parents.  With three boys that have been in the area of the table, facts are unknown.  There are suspicions about one particular BGS #2 as he was alone a couple of weekends.  But nothing conclusive.

Did not set out to narc on anyone.  As stated, nothing is conclusive.  In a few years, maybe the truth will come out with an amusing story.  That is usually how it works.  And Grandma will be a narc in the story. Ha!

Take care out there!
Janice
Posted by Janice at 9:52 PM