This week's Spin Cycle assignment is color.  I had no idea what I would do with that assignment.  But as usual the good Lord provided.  Here is my take on color for Gretchen's Spin Cycle.

Back in '63 a young Barbara Streisand recorded "My Coloring Book".  At church camp that summer our cabin presented that song while they colored me.  Lamo!  Yes, color me lamo!


This morning Gene was up and dressing for a meeting with a hematologist   It was to be a followup on some blood work taken by the vascular surgeon following the clot this past summer.  I was my usual slow rising self.  It was around 9:00 when I got myself up to begin getting dressed to accompany him as old people travel in pairs to doctor's offices.  I heard a terrible noise coming from the other end of our small house and hurried down the short hall to check on the noise.

As I came into the living area it was obvious someone or some thing was breaking into my window.  I thought a person was trying to break the window as I saw a blur of activity in the long, narrow space of light.  A closer look and I realized a squirrel was in our house trapped between the screen and the window glass.  First know that our windows have screens that are on the inside of the house and the window will roll open to the outside of the house. 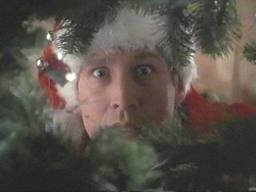 All I could think of was get that da*&^) rodent out of my house before it does any damage!  I quickly moved to the window placing my hand against the screen as the squirrel was using it as a trampoline.  I had it trapped though still moving wildly.  I was able to unlock the window with my other hand.  The handle for rolling out the window had been knocked loose, probably by the wild movements of the squirrel.  It took what seemed like hours to get the handle back on the turnie thing but eventually I succeeded.  I opened the window as quickly as possible.  The squirrel became a flying squirrel as it vaulted about 12 to 15 feet in the air over the flower bed landing by the arch in my garden.  It flew up a tree and it's tail was sending crazy signals the last I saw of the rodent. 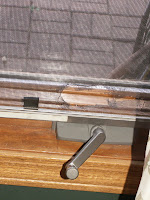 Now to figure out how the thing had come to be in the window.  Squirrels will come back if they can!  No loose wood on the outside soffits that I could see from inside.  No holes in the wood of the window frame but there was a hole in the screen.  But that is on the inside.  Then the reality struck me as I noticed just to my right the door of the fireplace standing open. 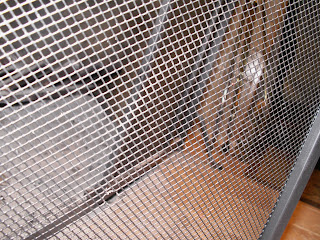 The squirrel had come down the chimney!  The ashes from last evening's fire were flung all over the inside of the fireplace and onto the hearth.  Our new steel screen was covered in ash, dented, gnawed on and had a couple of small holes.  That rodent was definitely in full panic mode when it apparently hit the door just right to gain entrance to my living room.

I could follow squirrel tracks as it obviously had headed for something like the 9' fully decorated Christmas tree.  Luckily for us it saw the light of day or something that sent it scurrying up and across a chair and table.  There was a trail of knocked over angels, clocks and decorations as well as a few faint ash foot tracks.  Even the Holy Mother with Baby Jesus were knocked face down on the carpet. 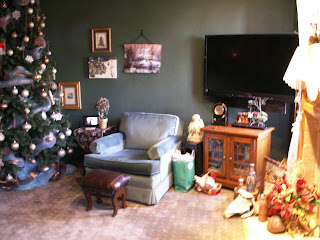 Gnawing its way to freedom it had chewed through the window screen and climbed toward the light!  Only the light was the window.  Our wall hung TV along with a curtain and the window handle were holding the loosened screen in place as the squirrel jumped wildly.  That was the scene I saw when I came in the room around 9.  The overturned clock had lost it battery and was stopped at 8:47.  So that is how long it took for the squirrel to chew through and become entrapped between the screen and window. 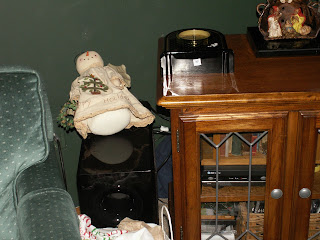 We were very fortunate that nothing else was damaged though I did find a couple of paper garland decorations had fallen down from cabinet tops in the kitchen.  But there is no way the squirrel had done that as nothing else was toppled.  I am thinking our Guardian Angel may have done that just for the fun of it all!

Gene came into the room after all the excitement was over.  He had been in the bathroom showering and getting dressed.  He never heard any of the commotion.  But it was Gene that realized the battery was out of the clock to help know the thing had been in my living room for over 13 minutes!  That made me turn as shade of Griswold Christmas Squirrel Grey.