This morning my usual wake up call came around 7:30 AM.  While in the loo I noticed no sound from Robbie the Robot.  Hmmm.  This was the scheduled time for the cleaning of floors.  Well, where is he stuck this time.  Thought I had all areas blocked where he liked to hide.  You know kids, they can find new places or manage to sneak someplace where they are not supposed to be.  Robbie is the same way.

My app on the phone usually has a map of where Robbie has worked.  The app shows the location of Robbie with a flashing green circle.  The app was locked up as it had tried to download an update.  No help from yet  another electronic device with a mind of its own.

Armed with a flashlight I looked under the sofa.  Couldn't see all the way so I had to get on my side to look all the way to the back.  No Robbie.  After finally getting myself off the floor I went to the bedroom.  Same thing.  Down on the floor with the flashlight.  No Robbie.  Check the hutch in the dining area.  The area where Robbie usually gets stuck is obvious.  No Robbie.  Around the corner to the kitchen area cause once Robbie was hung up on a thick pad.  No Robbie.  What the heck?  This  apartment is only 880 sq. ft. or 83.5 sq. meters.

I knew the robot was not in the bath cause I had already visited there.  Doors to the closet were closed.  Once more around the place checking under my chair where once Robbie encountered wires the stopped him.  Nope.  There was only one place left to look.  The small utility room.  I had left that door closed before going to bed.  And the door was still almost closed.  Robbie has no arms so how could he have gotten into that area?  I opened the door and sure enough, there was Robbie, "hibernating".  A word to describe using energy but not doing anything. 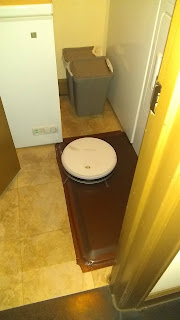 All I can figure out is Robbie went into bully mode and pushed the not latched door open enough to get through.  The machine always circles to the left so Robbie actually went behind the door he just opened.  Then the silly bully closed the door and was trapped in the little room just going back and forth.  At some point Robbie gave up when his deaf owner did not hear the alert that he needed help.  Yes, Robbie will say stuff like wheel stuck, move to an open area and battery low.

Once located, I did not scold the machine.  Rather another note to self, make sure the door is latched to the utility room or have it wide open so he can get out of the room!  I then pushed the little button on top and Robbie said smart vacuuming started.  I just realized Robbie has a female voice.  Is this vacuum transgender?  Does not matter.  Floors vacuumed for another day.

Yesterday as the vacuum was running I had the front door open.  Had to grab Robbie as they (pronoun for transgender) were attempting to go into the public hallway.  That stinker may run away yet.  Until then you can just look forward to more adventures with Robbie.

PS.  I found almost 300 of this same photo on my phone.  There were some where obviously my lights were on and some where maybe the sun was still shining.  Even a few that were black except for a reflection from the ceiling fan. Ceiling photos taken with my side?  Is there any hope for me with all these gadgets?!? 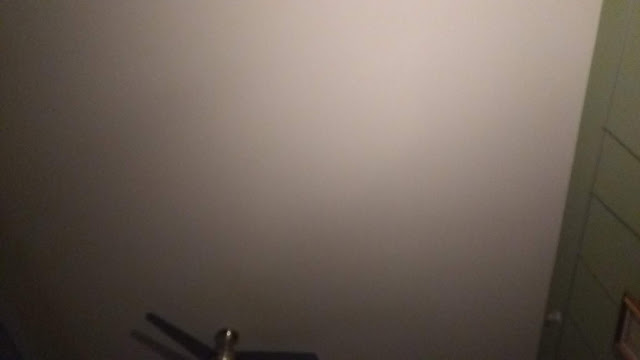